Sometimes it is useful to perform SAPT analysis for each point of intrinsic reaction coordinate (IRC), so that variation of physical components of interaction energy can be studied to better shed light on the nature of the process. In order to facilitate this investigation, a utility named IRC_SAPT is developed by me, which will be described below.

IRC_SAPT can be downloaded here: http://sobereva.com/soft/IRC_SAPT.zip. The files with and without suffix are executable file of Windows and Linux platforms, respectively.

IRC_SAPT is able to conveniently convert output file of IRC task of Gaussian to SAPT input file for every IRC point.

Before starting IRC_SAPT, user should prepare a file named "SAPT_template.inp" in current folder, which is a template PSI4 SAPT file that will utilized by IRC_SAPT. SAPT_template.inp should be a standard SAPT input file, but the net charge, spin multiplicity and coordinate parts of the two fragments of SAPT analysis should be represented by [monomer1] and [monomer2]. See example in Section 3 for detail.

After booting up IRC_SAPT, user will be asked to input the path of Gaussian IRC output file, then input the number of forward and reverse IRC points to consider, and then input net charge, spin multiplicity and atomic indices for fragments 1 and 2, respectively. Finally, a batch of SAPT input files are generated in current folder, geometry in each one corresponds to an IRC point.

This section illustrates how to use IRC_SAPT. The IRC corresponding to geometry transition of two configurations of water dimer is taken as example. It is worth to note that geometry and electronic structures of water dimer has been comprehensively investigated in J. Mol. Model., 26, 20 (2020) with help of Multiwfn code (http://sobereva.com/multiwfn), you may look at this paper if you have interest in characteristics of water dimer.

All files involved in this example can be downloaded here: http://sobereva.com/attach/595/file.zip
The programs used in the calculations are Gaussian 16 A.03 and PSI4 1.3.2.

First, we optimize a transition state (TS) and perform frequency analysis for water dimer by Gaussian via keywords "# B3LYP/6-311+G** em=GD3BJ opt(calcfc,TS,noeigen) freq". The geometry and the only imaginary frequency mode is shown below

Then we generate IRC trajectory based on the optimized TS structure via these keywords: "# B3LYP/6-311+G** em=GD3BJ IRC(calcfc,recalc=3,LQA,maxpoints=50)". The IRC animation is shown below

The corresponding energy variation curve is

As can be seen, the calculation level in this template file is SAPT2+(3)δMP2/aug-cc-pVTZ, which is shown to be able to accurately represent H-bond interaction in my work J. Comput. Chem., 40, 2868 (2019) DOI: 10.1002/jcc.26068. The "psi4.print_out" directives ask PSI4 to print reaction coordinate, total interaction energy and various components at the end of the task. The [RxCoord] line will be automatically replaced by IRC_SAPT with reaction coordinate. You can properly modify the calculation level and memory setting, other content should not be modified without special reason.

Now 61 PSI4 input files have been generated in current folder, the name ranges from 0001.inp (the first IRC point) to 0061.inp (the last IRC point), and as shown on prompt, 0031.inp corresponds to the TS geometry.

Finally, we use such as Origin program to plot the data. Import energy.txt into Origin and draw line+symbol map, using the first column as X-axis data, and other columns as Y-axis data, then properly modify plotting settings, the following map will be obtained. 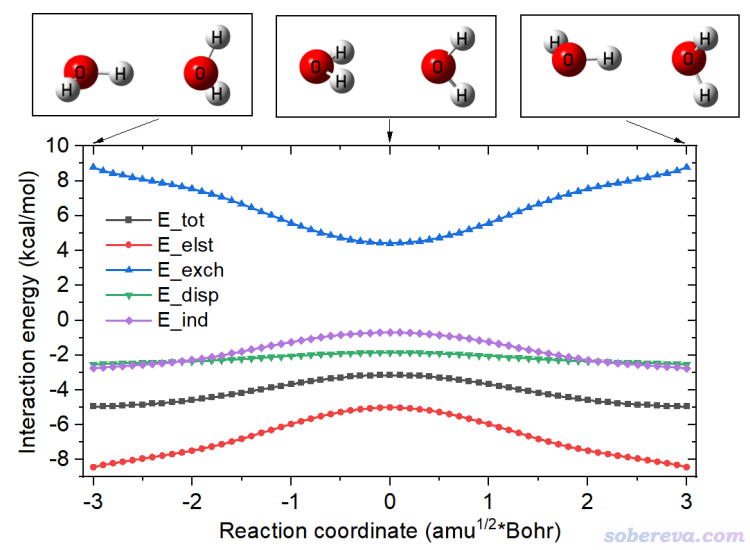